Carl the Complainer by Michelle Knudsen.

Carl complained about paper cuts, the color of mint chocolate chip ice cream, that the water in the park’s water fountain was not cold enough…in fact, Carl complained about everything! He complained so much that his friends started to call him Carl the Complainer. Then one day when Carl was complaining about the fact that the park closed at five P.M., his friend Dale told him to stop complaining and do something about it.

That’s when Carl discovered how to act on his concerns instead of just complaining about them. 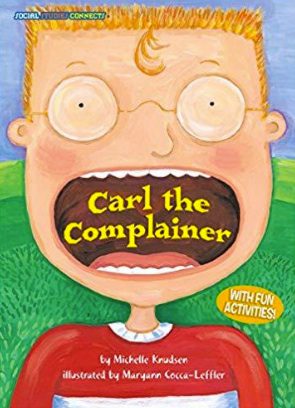 On December 15 we celebrate Bill of Rights Day. The first ten amendments to the Constitution are known as the Bill of Rights. The First Amendment is probably the best known of the Bill of Rights. In the First Amendment all citizens of the United States are allowed to establish and practice their religion freely; to speak their ideas and opinions; to hold meetings and to petition the government; and to have a press – newspapers, magazines, TV news, etc. – that has the right to publish the news and ideas.

What rights did Carl apply when he and his friends wrote their petition and presented it to the Town Council?

From what you know, do you think people who live in a country with an absolute monarch or a dictator have the same freedoms as we do? Why or why not?

Like Carl, each of us has the right to express our opinion about something in our classroom, school, or community that we would like to see changed. With that right comes responsibility.

How did Carl handle his right to request that the park stay open later than 5:00 P.M. in a responsible way? Be prepared to support your answer.

First, state what you would like to see changed. Then identify to whom you would share your concern. Finally, identify the steps in your plan of action to have your voices heard.

We are all citizens. Like Carl the Complainer, we have the right to speak out and share our opinion. Along with that right comes responsibilities. What responsibilities do you think you should follow if you decided to share your opinion about something you would like to change in your classroom, school, or community?